Life with a Bean - the first three months 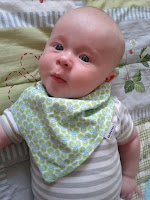 Our Little Bean is almost three months old now... and I feel like we have made it through the tough initiation period and are in the land of cuddles and smiles. Finally! It sure hasn't been easy. I hear that boys tend to be harder than girls for the first 18 months, and then easier for the rest, haha. Lucky he's the cutest little thing on this earth!

People often ask me if motherhood is what I expected. Well... I'm not sure if I really had any expectations, to be honest. The love I feel for my boy is as expected, in that it is greater than I could ever have fathomed. But the tough bits? Well, I thought the tough bits only involved things like poo explosions, nappy rash, learning to differentiate hunger / pain / tired / bored cries, and dealing with an extreme lack of sleep. What I didn't expect was the intense emotional involvement with each of these things (okay, not so much with the poo explosion). I didn't expect that each and every time he cried I would feel such an overwhelming sense of doom, as if my whole world was shattering. My stomach would drop, I would break out in a cold sweat and often I would also start to cry. I imagine that it would be the same feeling you'd have if you found out a loved one had been in an accident and you didn't know the outcome. It is such a horrible feeling, and to have it occur on repeat throughout the day and night is emotionally draining to a degree I can't describe. Around two weeks ago, his cry changed from the newborn cry to a baby cry, where it's much easier to distinguish the problem and where it doesn't make me react in such an extreme way. Thank God. I was worried I was going to be like that for his whole life! I mean, how would I ever let this boy out of my sight? 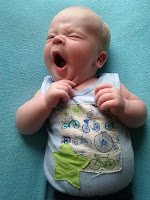 Another thing I didn't expect was how well I am dealing with a lack of sleep. The hubby and I have discussed it, and we figure it must be hormones, because he sure struggles with it! The first week of his life, I probably had a total of ten hours sleep... perhaps even less. And I was still functioning! And then there was the period of around four weeks where I was functioning just fine (though a tad tired) on just two and a half hours a night, all broken up into half hour chunks, and without managing to get any naps in the day. And I'm the kind of person who has always needed at least nine hours sleep to feel human. Now I'm running on somewhere between five and six hours a night, but at least I am getting some deep sleep now. I usually get around three hours in one stretch, then two hours, then a half hour. If I'm lucky, Dunc will then take Ruben downstairs for some morning time while I grab another hour. 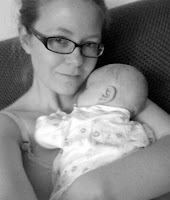 What else was unexpected? The many many many hours a day I spend with a baby in my arms, bouncing and swinging like crazy to try and get him to nod off to sleep (though, the last two days we have had major sleep breakthroughs, and he has managed to nod off himself while in his bed for at least one of his naps!), the inability to breastfeed (I wrote a huge post on this and deleted it -- it is too emotional -- but trust me when I say that I exhausted all possibilities. The decision to stop was made after visiting five different breastfeeding consultants around Switzerland, for a total of 23 consults, and it seemed they all breathed a sigh of relief when I admitted defeat after two and a half months of feeding battles. Now our household is a much happier one.), my incompetence at dressing a baby, the fact that I often cry out of happiness when he looks at me and smiles, the amount that I am missing my mum... and probably a thousand other things.

So we've almost made it through the 'fourth trimester', and we are both so excited to see what fun the next stage will bring. And perhaps I will even have a chance to do some writing! (See my previous post 'What about my novel?' and multiply these issues by a thousand.) 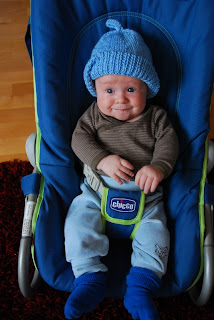